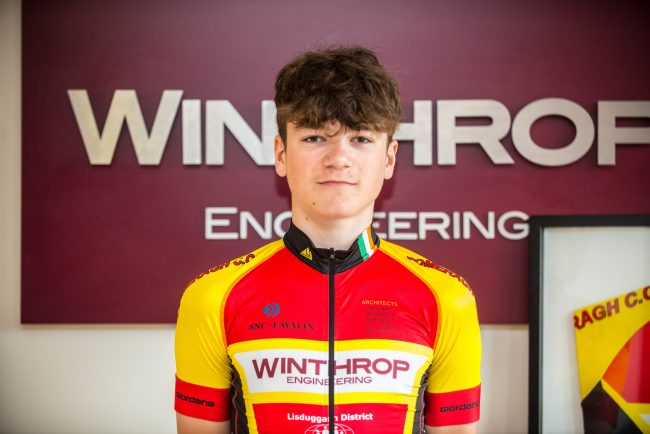 In the first of this years rider profiles for our junior tour team, we shine the spotlight on Rhys Kenny, who’s best result to date was his win at the Paddy Flanagan in 2017. http://www.comeraghcc.ie/victory-for-rhys-kenny-in-kildare/

In his own words; “I have been cycling since around 2011, but only joined the club in 2014. I started racing that summer but only really started taking it seriously from the start of last year. Among my highlights in cycling is the Paddy Flanagan last year, which I apparently won, and all of the build up to JT last year even if it didn’t pan out we’ll. I’m really looking forward to the Junior tour this year as I feel I have some unfinished business, even if it’s just finishing this one. Preparation this year has been more difficult because of the exams but hopefully some panic training will get me ready for the week.”

Q1; What is your favourite Irish race and why?

RK: De Ronde Classic, the course is quite testing for a Sunday race, and we’ve done we’ll there in the last 2 years, even without the win.

Q2; What is your favourite race on the professional calender and why?

Q3; Who is your favourite current professional cyclist and why?

RK: Sam Bennett, bit predictable but his Giro this year was amazing.

Q4; Who is your favourite retired professional cyclist and why?

RK: Jens Voigt, he raced with nothing to lose and never stopped fighting

Q5; What was the last book you read?

Q6; What is your favourite movie?

Q7; What kind of music do you listen to?

RK: Bit of a variety, depends on the context.

Q8; Any hobbies off the bike?

RK: Not much to be honest.

Q9;  What are your expectations for the junior tour?