No year has borne more significance and success for Irish cycling than 1987.  Stephen Roche reached the pinnacle of his career, joining the great Eddy Merckx as the only other cyclist to win the ‘triple crown’ of overall victories in the Giro d’Italia and the Tour de France stage races plus victory in the World Championships.  Roche’s rise to prominence in the sport coincided with that of Sean Kelly, who is still revered to this day as a hard man of professional cycling.  Kelly from Curraghduff, Co. Waterford was ranked world number one for six years from 1984 and is arguably the most accomplished sporting hero Ireland has ever produced.  The Kelly-Roche era witnessed no shortage of two wheeled recruits and Waterford City and County boasted no fewer than six successful cycling clubs at this time. 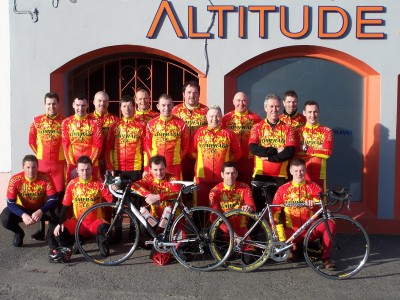 It is against this backdrop that Comeragh Cycling Club enjoyed its formative first year.  Comeragh CC was formed initially as a cycling club that would deliver equal attention to all of its members whether they be touring, leisure, or racing cyclists, and it is this ethos which has ensured its survival twenty five years later. The club was set up by Eamon Barrett of Altitude Cycle & Outdoors in Waterford City and although not directly involved in the club at this time Eamon continues to support the club sponsoring our very successful Altitude summer league and many other events.

The two decades since 1987 have seen many Comeragh Cycling club riders complete in events such as the Maracycle, Etape du Tour, the Wicklow 200 & the Sean Kelly Tour of Waterford to name but a few.  The racing section of the club has seen its members win titles at provincial, regional, national and international level.  This includes Comeragh Cycling Club’s most famous son Ciaran Power, overall victories in the Ras Tailteann on two occasions and his 13th place at the 2004 Olympic road race in Greece.  Now retired from Cycling and qualified as a Neuro Muscular Physical Therapist, Ciaran has set up his own Sports Massage business on O’Connell Street in Waterford City.

Today the club has over 100 dedicated members

From the heights of 1987, the interest in cycling declined at a national level and as the years passed the number of clubs also dwindled significantly.  Comeragh CC were however one of the clubs to endure and continued actively throughout this time thanks in no small part to the relentless work of a loyal committee and membership.  Today the club has over 100 dedicated members and is swelling its ranks all the time. The introduction of the bike to work scheme has added to this with many cycling enthusiasts taking up the sport.

Over the years Comeragh CC has hosted countless events including National Road Race Championships on three occasions all of which was recognised by Cycling Ireland as being some of the best run National Championships ever in this country.  In the run up to our most recent Senior Championships of we also raised money which was donated to the National Council of the Blind, one of the many charities that have benefited from Comeragh CC over the years. In 2009 Comeragh CC were approached by Waterford sports partnership to take out two visually impaired cyclists on borrowed tandems, these were old heavy frames which were quite difficult to cycle so in 2010 and in conjunction with Waterford Sports Partnership Comeragh CC raised over €3,000 to purchase two good tandem bikes which have been used by members of the club since, acting as pilots for two visually impaired cyclists in the Sean Kelly Tour and many other events.

Comeraghcc also work very closely with Waterford City Council in hosting National bike week . In June, 2010 we ran a very successful Open family fun day in the park and emulated it’s success with the help of club members in 2011/12/13/14, Waterford City Council volounteering the regional sports centre and allowing us to use the running track for racing. 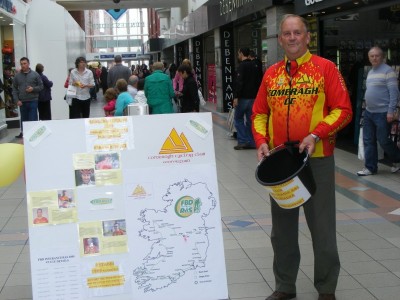 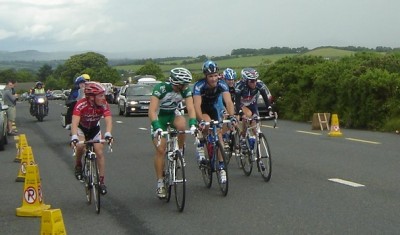 Still going Strong - Here's to the next 28 years

Waterford sports Partnership also benefit greatly from the Comeragh CC with some members running safe cycling & bike skills for social groups in the City and more recently running a 6 week bike skills session with a group of kids with Authism. We have also been approached to work in the future with a group of Amputee’s who wish to improve their bike skills. As part of our partnering with WSP we are also members of the Sean Kelly Tour of Waterford organizing committee. With that brings the added requests of running training spins for school going kids  and the newly established women on wheels group which was set up to encourage more women out on their bikes and train for the SKT, these are 8 week training programmes which we share with other clubs in the area.

Comeragh CC are an open club and welcome members from other clubs to join our training spins and events.  Our members have a great relationship with other sports clubs in the area and regularly help marshaling events from the Suir Valley 3 Day, Waterford/Carrick Tri Club annual Triathlons, as well as many charity cycles run by various clubs in the area.  Our winter schedule usually comprises of an end of season “Surf, Cycle & BBQ, Mountain biking in Ballyhoura, Table Quiz etc. before knuckling down for winter training which starts in October with scheduled items like circuit training, weight training and spinning classes.

As you can see Comeragh CC are actively involved in a number of projects which will hopefully raise cycling awareness in Waterford City and County and encourage new members into the sport, ensuring that Comeragh CC is still going strong 28 years from now.