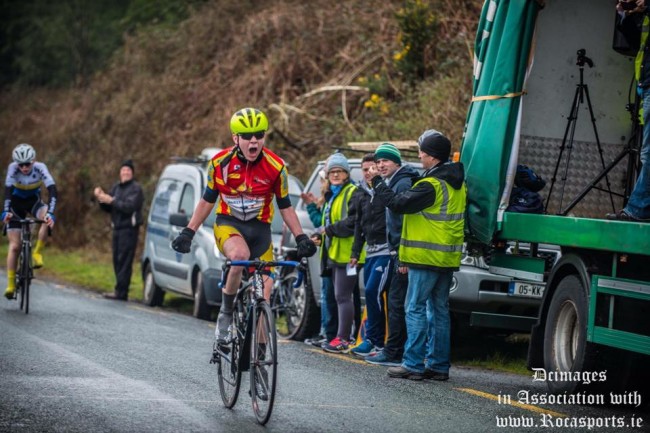 Sunday April 3rd saw the annual running of local club Dungarvan CC’s Cyclesports GP. All races from under 12 up to A1 have the same finish, up the hill towards Colligan woods.

The underage races set off early with Comeragh CC represented by sole riders Jamie Merriman and Steven Crowley in the under 12 and under 14 races respectively. While luck may not have been on Jamie’s side today in the under 12, Steven bagged himself a fine 4th place against some stern competition in the under 14 race. Well done Steven.
Comeragh CC had a very strong representation in under 16 race on the day with seven riders taking to the start line. Early in the race our own Ciaran O’Sullivan and two others broke away from the bunch and managed to stay away for the entire race. At the finish it was down to Ciaran and one other to battle it out for top honours on the day with Ciaran emptying the tank and sprinting very well to earn himself a very well earned win. Super stuff Ciaran, knew it wouldn’t be too long coming. Conor Coleman was also in the prizes for the club too today under 16, just missing out on the 3rd step of the podium but nonetheless taking a fine 4th place for himself. The other Comeragh riders made fine accounts of themselves too in the race and it’s only a matter of time before the rest of the lads start seeing results also.
Meanwhile in the A4 race, amongst a group of about 80 riders, Comeragh CC had 4 riders take to the start. The A4’s would cover two of the 35km laps. Although the weather had seemed to be improving as the day went on from what had been a very wet Saturday the previous day, about 20km into the race the rain once again started to fall which made quite a nervous bunch even more edgy. There were a few attempts at breakaways but nothing would stick. Colm Dillon, John Tracey, Liam Walsh and Brian Kenny were towards the pointy end of affairs for much of the race, and were involved in the chasing down of a few attacks, and even got involved in one or 2 of those attacks also. But alas, as is often the case in A4 races, the day would be decided by quite a hectic bunch sprint to the line. Unfortunately none of us would figure in the prizes but were all happy to cross the line safely..
Reports to follow on A3 and A1-A2 races.
Thanks to John Coleman for the photos.