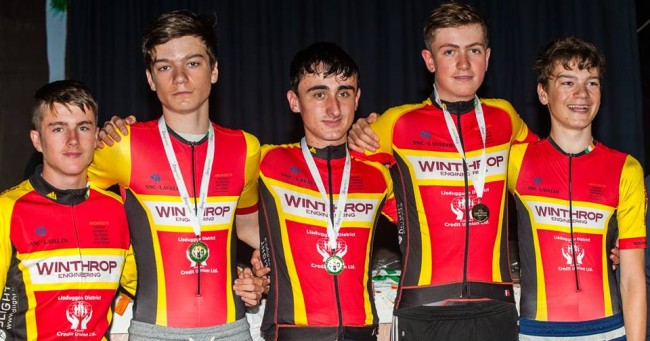 O’Leary Stone Kanturk Cycling Club hosted this years Youth National Cycling Championships on the Saturday and Sunday August 20th & 21st. Present, as one might imagine, was the most top talented young cyclists in the country, some of whom no doubt will become household names amongst the cycling community in years to come.

The weekend entailed three separate events, a time-trial, a criterium and a road-race at all age groups from under 11 to under 16.

First off on the Saturday morning was the individual time-trial. Anyone who, in the past, had competed in the May Bank-Holiday Corkman 3-Day race in Kanturk will be familiar with the course that was used, an 8km run on the N72 from Lombards cross. The under 16 TT was first off the start and the Comeragh CC representatives were all off and gone, one after the other, before 8.45am. The overall winner, Aaron Doherty of Wesport Covey Wheelers completed the course in a time of 12.21. Comeragh CC riders finished; Tomas Walsh 9th- 13.00, Jason Kenny 13th- 13.31, Conor Coleman 14th- 13.31, Rhys Kenny 17th- 13.40, Ciaran O’Sullivan 23rd- 13.51 and Aaron Dillon 28th- 14.06. Indeed Jason and Conor were only seperated by a mere 4 thousandths of a second at the finish. Tomas’, Jason’s and Conor’s  times and finishing spots did however earn the lads the overall team prize for the Time-trial. Super!!

Next up for Comeragh CC in the TT was the two under 14 riders Steven Crowley and Luke Griffin. Steven posted a time of 14.04 to earn 9th spot with Luke in 13th spot in a time of 14.17. Very good indeed.

The close-by village of Banteer was the venue for Saturday afternoon’s criterium. Torrential rain before and during the events led to appalling conditions for close criterium racing. Tomas was caught up in an early crash in the under 16 race. A few minor scuffs to himself but the rear derailer hanger on his bike snapped meaning he had to take a spare bike and a lap out, and soon after that retire. At the end of the 30mins plus 3 laps of racing the bunch sprint at break-neck speed decided the affair. Conor was best of the Comeragh lads, crossing the line in 12th place.

Brilliant team-tactics played out by O’Leary Stone Kanturk Cycling club would decide the under 14 criterium, the winner broke clear and the remainder of his team played a blinder in closing down the race.

Absolutely great riding from all over the weekend in really tough conditions. Big well done to all. Big thanks to John Coleman for the great pictures and for the repair to Tomas’ bike. To Shane Power for the derailer hanger. And a big thanks Karen Coleman for bringing home the wet cycling gear on Saturday evening and having it dry for the lads on Sunday morning.

As a side note Comeragh CC would also like to send a huge congratulations to Dungarvan Cycling Club’s under 13 rider Mark McGarry. Mark earned himself silver medals in both the time-trial and criterium on Saturday, then topped it off with a victory in the road race on Sunday. Well done Champ!! Also from Dungarvan CC was Ciarán Frisby who rode well the whole weekend at under 14 level and County Waterford’s only girl at this years National Championships, Aoibhe Power who came in 4th place in the time-trial, 4th in the road race and a fantastic 2nd in her criterium race.