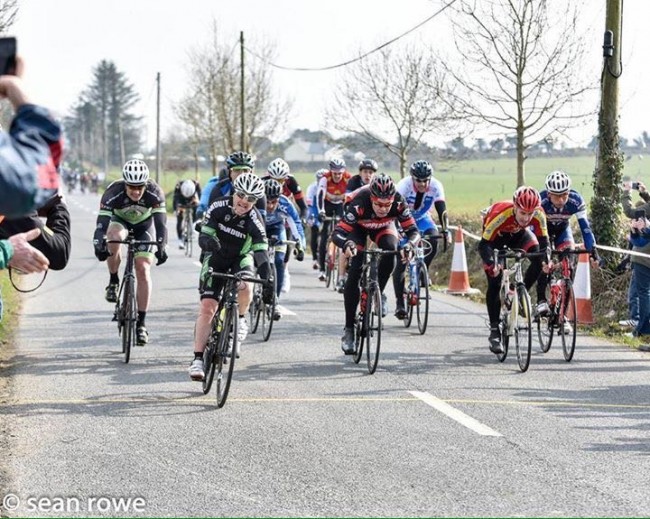 The A4 Landy Cup race rolled out from Crehana, near the back of Scrouty,  at 11-20 am in near perfect conditions for racing. The Comeragh club was very well represented on the start line with Eoin O’Shea, Brian Kenny, Liam Walsh, Paul Griffin, Colm Dillon  Emmett Kelly and John Tracey. They had to cover 2 laps of  a 40km rolling course, no big major climbs on it but tough long drags especially from Kilmacthomas to the finish approx 9 mins of hardship.

With  this punchy course the race had a couple of lads looking to break away, with one group putting in a descent effort on the first lap after passing through Kilmacthomas, this was pulled back but it did have the effect of reducing the group. One or two solo efforts were attempted second time round  but to no avail as it  became clear to all remaining riders, get up the nasty drag out of Kilmac and hang on for the bunch sprint. But hanging on was the issue especially after crossing the wee bridge over the Clodagh river.

Cresting the climb and with 1km to go approx 15 lads were left battling it out with Emmett and John in the mix. Emmett’s effort was gallant but faded, John looked to be boxed in, but a gap opened up and with  a last gasp effort he got up for a podium finish nicking 3rd spot. All remaining Comeragh riders finished safely, with special  mention to Liam, Emmett and Brian making their racing Debut.

In the A3 race we had a total of 10 riders on the start line. It was the first race of the season for Tom Duggan , Dermot Galvin , Jp Sexton,  David Butler and Eoin Maher while Finbarr Power, Gary Robinson, Robert Coffey, David Howell and Tadgh De Barra have be on the road the last number of weekends.
The race started off with a very fast pace with plenty of attacks trying to go clear with the lads getting stuck in right from the start. The clock read an average speed of 42kph on the road down to Mahon Bridge. There wasn’t much time to take in the beautiful scenery as we passed off the Comeragh mountains. Shortly after the left hand turn at Mahon Bridge a number of riders went clear with Tadgh and Robert in the move of approx 8 riders. They opened up a gap of around 30 seconds on the draggy road from Kilmacthomas back to Carrick and the number in the break increased to 15 riders. The pace proved a bit too much for Robert and eventually he was back in the main bunch. 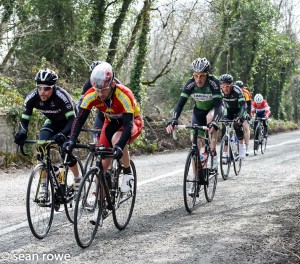 On the second lap the Break were riding very strong and the gap was out to over 50 second and just before the Comshingaun drag there was a strong attack from the Cork Giant team with Ronan Tuomey, Dillon Corkery and eventual winner Robert O Leary bridging across to the break. It was looking more likely that the group would not be caught and that turned out to be the case and in the closing stages the Cork Giant trio went clear splitting the break to pieces. Tadgh managed to hang on in there coming in just outside the prizes in what was a great ride considering he has had a chest infection since Ras Mhaigh Eo a few weeks ago. It will give him plenty of confidence heading to Ras Mumhan next weekend.

Many thanks to Sean Rowe and John Coleman for the photos.