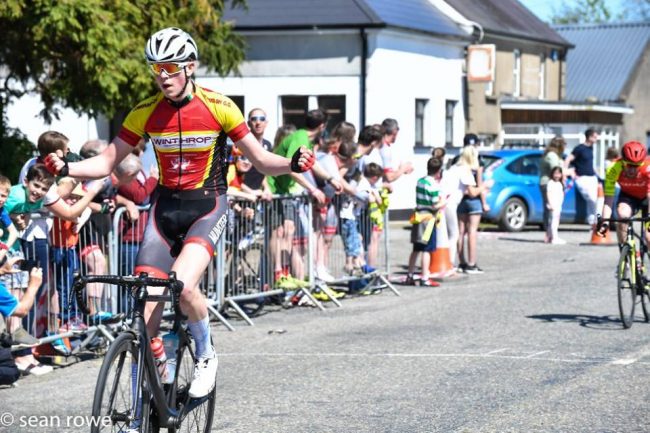 After a string of top 10 results already this year, second year junior Tomás Walsh has taken his biggest result to date with a superb victory at the Wexford Wheelers hosted Frank O’Rourke A2/A3 race today in Camross. Ciaran O’Sullivan also in the prizes with a brilliant 5th place.

The decisive attack happened inside the first 30 kilometers when a two man attack jumped clear, followed shortly thereafter by Tomás to make it a 3-man breakaway who worked well together and were joined a few further kilometres later when a small bunch containing Ciaran bridged over.

At the last time check with 4 km to go, the break had a gap of 30 seconds to two chasers and a further 40 seconds to the bunch. Ciaran marked the attacks brilliantly in the closing 10 kilometers keeping it together to the closing stage of the race. The gallop opened up at around 300 metres to go with Tomás second wheel.

Tomás then jumped with 250 metres to go to take a very decisive and well earned win.