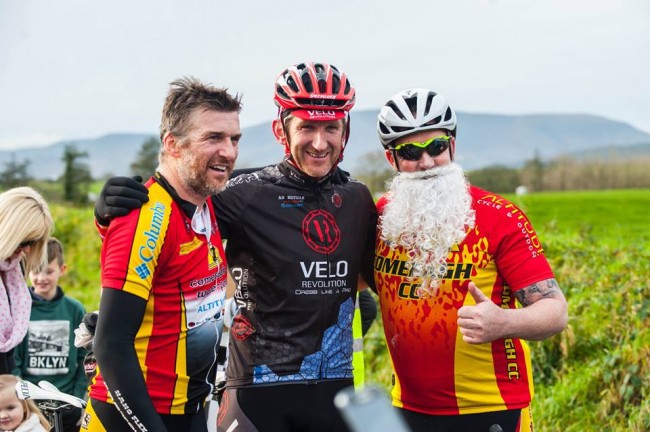 The weather gods were shining down on us yesterday morning as storm Desmond passed on to leave somewhat bright and calm conditions. But it wasn’t long before another storm arrived with 73 eager cyclists queued up to sign on at Carrols Cross for the Race for the Ras. It all kicked off shortly after 12.30 a little late as Santa had a mechanical on the start line. The first two laps were neutralized so it was a nice steady pace and everybody got a chance to catch up and talk to friends they hadn’t seen since the racing season finished, while Santa was busy chatting to all the on lookers.

After 2 laps  we approached Carrols Cross for the second time and the flag was dropped as we went up the hill we nearly had a number of casualty’s straight away with the smoke inhalation when Eoin 0 Reilly floored the lead car up the hill. The attacks came straight away and within a couple of kilometres a group of around 8 or 10 were gone clear with our own rider Martin Cullinane amongst those. The pace back in the bunch was fast but the break after 1 lap had a gap of nearly a minute. There were few more attacks on the second lap out of the bunch with Trevor Robinson and Robin Kelly setting off in Pursuit of the men up front. At that stage the win was going to Come front the front group. The Attacks were relentless in the breakaway group in the final kilometres but it was former national champion Hugh Mullhearne of  Carrick Wheelers who took the sprint holding off Keith Gater of WRC and Stephen Murray Velo revolution in 3rd while Martin was just behind in 6th.  Our own Thomas Walsh was the first u16 over the line who looked very comfortable in the bunch.

Afterwards the prize given took place in the Clodagh bar in Portlaw and Refreshments were given out and a few sneaky pints of the black stuff . All the prizes were donated so a big shout out to Robert Coffee – full of beans , Rolf and Robin at Waterford Cycle Centre, Eamon Barrett in Altitude, Edel and Shane O Donoghue at the Clodagh Bar, Martin Cullinane at TBay Surf Centre, Santa himself Mr Ciaran Power NMT Physical Therapist. Also a thank you to Trevor Walsh of WAC Who donated all the Blaas, John the chairman of portlaw soccer club for the use of the shower facilities and John Coleman for the great Photos as always and everyone who marshalled and did lead cars. To those who travelled from Cork, Galway, Dublin, and Wexford and all the local clubs that supported.

Finally the very best of luck to Waterford Racing Club, Dungarvan CC, Rosbery Racing Club in there Journey to the Ras.