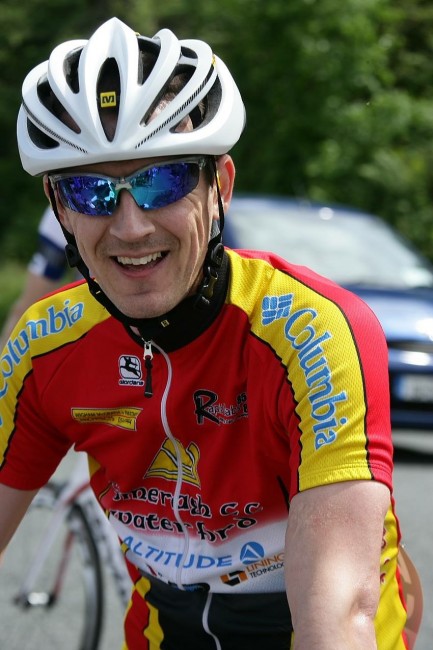 When and why did you take up cycling: It was something that I always remember being very much into, from the age of 6 scooting around Lisduggan on my bike. My favourite bike at the time had back pedal breaks, great fun for skidding around every corner. It was around the mid-80’s I got hooked on the BMX craze. Everyone was building ramps out of old bits of timber, bunny hopping over your mates, flying down pedestrian steps was always great fun and got the adrenaline going.

My older brother Paul was a big influence on me getting into road racing, he like many other around the country at the time got captivated into the Kelly / Roche era,

Paul went and got himself a fancy Raleigh Bike and was heading off every Saturday & Sunday morning for spins with newly formed Comeragh CC. So I was determined to get a bike of my own that had one or two gears and get out on the open roads.

My Dad realised that I wasn’t giving up on the idea I wanted a road bike, with my daily relentless questions of “when am I getting a new bike” (on repeat x40) My Dad he eventually cracked got me a 10 speed Raleigh bike from OK cycles in Carrick.

When did you join Comeragh CC: I joined Comeragh CC in 1988 and started under 12 racing in 1989. I raced every year from then up to 1996 when work started to take over. I think we saw every town & back road in the Country in that timeframe. It wasn’t until I got new bike in 2008 that I got the bug back again & it’s been great to see so many familiar faces get back on their bikes & re-joining the club once again. Cycling has gone through the snowball effect in the last few years & great to see groups taking over the roads every Saturday & Sunday mornings.

What is your favourite cycling memory since you started cycling: There have been plenty of great moments I had over the years to choose from some of my favourites are:

What is your favourite race on the calendar: I have always enjoyed the endurance stage races they seem to suit me better than short fast races, particularly the last few years enjoyed the Wexford 2 day. It is a well organised race & the fact it’s only down the road seams to tick all the right boxes. (Exception from the hill climb stage, I would be quicker walking that part)

Who is your favourite cyclist: There have been plenty but I will split this into 3:

What is your favourite international race and why: I always enjoy the grand Tours but I have to say after our Team Comeragh Visit to Belgium in 2014 for the Tour Of Flanders it made me appreciate what an unbelievable endurance battle this one day Classic is. The Saturday 260KM sportive was a seriously well organised event, as we sat with beer in hand to watch the pros making it look effortless and doing the circuit almost 1 ½ hours quicker on the Sunday was unreal experience.

Our next mission should be to try get Team Comeragh over to the hell of the North. (Aka Paris–Roubaix) for some more pavé.

Famous quote of that weekend just as we found a small smooth tramac strip at the edge of one of the pavé sections Timmy shouts “I’m here for the cobbles” as he blasts past us down the center line of rough cobble stone strip.

What was the last film you watched: Back to the future Part 2 to see how many predictions that the movie got right, apart from flying cars & hoverboards Spielberg wasn’t too far off. Recently just before that was Wolf of Wall Street. I enjoy Martin Scorsese films or anything with Robert De Niro.

What do you like to do for fun off the bike: I do enjoy siting back & putting the feet up listening to music with a bottle or two of red wine happy days. The other side I enjoy is live music, going to see bands / Djs play you can’t beat the atmosphere at gigs. Electric Picnic is a must every year particularly this year without the mud was top notch.

I do love taking time out & spending time traveling with the family, I never took a year out & got to travel as a student so I am making up for it now.

I would love to do a cycling holiday around France ahead of the stages & see the Tour go by, but it would take some serious convincing to the family on this one!

What are you goals for the 2016 season: “It time to get serious Hally and get a RAS under your belt”! (The voice of Ciaran Power at almost every training spin for the last 2 years)

My main plan for 2106 is to stay upright on the bike, as my crash in this year’s Gorey 2 day resulted in a broken elbow which spoilt all the hard efforts of my decent winter training.

I have similar programme ahead between now & December. In the new year plan to take it up a notch and pick out some harder races that I avoided last year and see how things are progressing.

I feel there is great drive in the Club & 2016 should be an interesting one. Well done to Martin O’Brien for his efforts with the winter training plans & controlling of the spins, this makes them enjoyable. Also big well done to all committee members & their efforts that go on behind the scene. It’s my first year back as committee member & great to see how much of people’s spare time is put aside for the club.

My favourite quote which best describes the sport is: “cycling isn’t just a sport it’s a way of life”