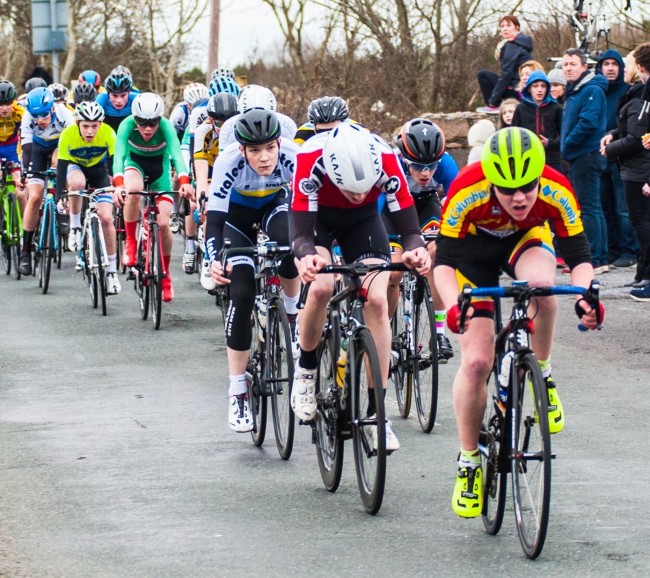 Comeragh CC was represented the weekend of march 12th and 13th at Ras Mhaigh-Eo by, in total, seven underage club members.  Steven Crowley and Luke Griffin in the under 14 event, with Ciaran O’Sullivan, Conor Coleman, Thomas Walsh, Aaron Dillon & Evan Cullen taking to the road in the under 16 races.

Stage 1: First up on Saturday afternoon was a road race for the lads with a hill finish. In the 20km under 14 race Luke Griffin was unlucky to be involved in a crash on the first of the 2 laps. Steven Crowley put in a stellar performance to staying in the main bunch chasing a lone breakaway and when he came to the end of the second lap which marked the start of the hill climb, cheered on by his fellow club mates, Steven put in an attack which split the bunch and eventually secured him a very hard earned 4th place on the day. His, and everyone else’s immediate concern however was for his fallen team mate, but after a few anxious hours the good news came through that Luke had suffered no serious injury, just a sore shoulder and a bit of road-rash.

In the under 16 race on Saturday the lads had to wait till the other races were finished and then contend 5 of the same laps followed by the same arduous hill climb. Ride of the day was by Ciaran O’Sullivan who gave it absolutely everything, leaving nothing behind, to finish and absolutely brilliant performance in 10th place. His efforts didn’t go un-noticed either by the representative of Cycling Ireland who was on-hand taking some notes. Thomas Walsh, who was taking part in his first ever open race, finished the day not too far back together with Conor, two great performances. Evan Cullen & Aaron Dillon were a bit further back but still made good accounts of themselves on the day.

Stage 2: Sunday morning was a 4.3km time-trial for all riders starting at the foot of the picturesque Croagh Patrick. Surprise of the day for some, and something which seemed to give all the lads a little lift, was the arrival of Luke Griffin at the starting point. We make them tough as nails here in the Déise!! All the lads were reasonably happy with their times with Conor Coleman posting the best time of our representatives.

Stage 3: Sunday afternoons stage, an 8km lap of which the U14’s would do 3 laps and the U’16’s 6, although a flatter affair was nonetheless equally as brutal in terms of the effort required to stay in the game. In the under 14 race which was won by last year’s national champion Tom Moriarty of O’Leary Stone Kanturk, who would infact win all 3 stages and the overall prize was hotly contested to the end by Steven Crowley. Steven even initiated the move which ended up being the wining breakaway. Steven put in a brilliant performance all weekend and bagged himself 6th place overall. Well Done Steven!!! Luke Griffin, who no doubt was still suffering a bit from his tumble the previous day finished in a small group of 4 that had formed and had their own race within a race. Big bualadh bos to Luke for even getting back on the bike on Sunday. In the U16’s race the pace was hot from the outset and puts in no doubt that some of the participants have a very bright future in front of them, and worryingly, will be “pesky juniors” in 2017.. Watch out A3’s!!!        Our boys put in brilliant performances once again with Ciaran, Thomas and Conor in the main bunch and Evan and Aaron again representing themselves well. Overall Ciaran finished 11th, Conor 12th and Thomas 20th

A huge Kudos has to go to all the riders form all clubs who took part in this event though. The level of enthusiasm, dedicaditon and indeed sportsmanship shown by all the boys and girls is an example to all. Big thanks to Wesport Covey Wheelers for hosting the event. A special word of thanks too to the Westport order of Malta who looked after Luke on Saturday.