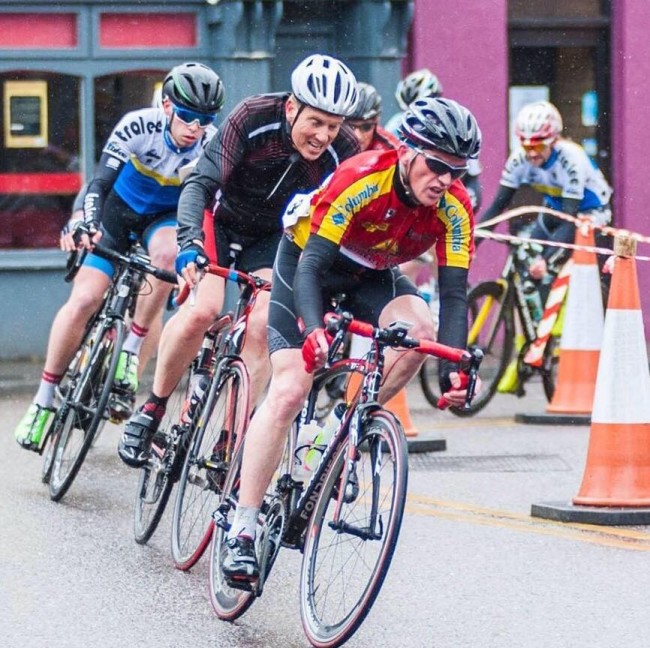 The May Bank-Holiday weekend’s traditional Corkman 3-Day took place in the roads in and around the town of Kanturk with a race for A2’s, A3’s and Juniors and a seperate A4 race.

Comeragh CC had sole representitaves in both races with Finbarr Power in the A2/A3/Junior Race and Colm Dillon in the A4 race.

Saturday’s stage was again loops of the Kanturk-Freemount-Newmarket-Kanturk Circuit with the A2/3/Juniors doing 3 laps for 100km and the A4’s doing 2 laps for 67km of racing. Unlike the 2015 edition the weather was on our side thus year, a fine bright day, albeit with a bit of a breeze, nonetheless, grand conditions for racing.

Both A2/3/Junior and A4 races finished in bunch sprints at the finale with Finbarr & Colm comfortable in their respective bunches to secure the same time as the stage winner going onto Sunday mornings TT.

For the TT the first rider was off at 9am, then at 1min intervals all through the A2/3 and onto the A4, a moderate head wind on the morning kept things honest for all. Finbarr knocked in a time of 13 mins flat in a discipline which he would admit is not his forte, Although perhaps he might put it slightly differently.  Colm completed his time trial in a time of 12 mins 40 secs to earn 7th spot in the time trial and 6th place on general classification going into Sunday’s flat-ish stage.

Sunday’s stage started and finished in the village of Banteer, a flat-ish stage which would, it seem suit a sprinter. Finbarr had the mis-fortune to puncture on lap one of five and lost about 2 mins by the time he got serviced so had to complete the remainder of the A2/3/Junior stage on his own.            In the A4 Sunday stage a lone Blarney rider broke away at the beginning of the second of 3 laps. There initially was reluctance to chase him down but eventually a rider from Kilarney, one from St. Teirnans and Colm laid chase. Before long this trio was reduced to a duo with just Colm and the Kilarney rider attempting to bridge the 70 second gap that had been opened up. They did manage to get a 45 second gap on the main bunch at one stage but with both riders tiring after being away for a lap and a half they made the decision to settle back into the bunch and chase the sole leader. This Blarney rider was eventually mopped up on the home straight and Colm would again finish in the middle of the bunch gallop to maintain 6th place on GC going into Monday’s 4th and final stage.

Monday’s stage, most of  the A2/3/Juniors set out for what they thought was a 4 lap encounter only instead of getting the bell at the end of the 3rd lap, they got a sign that said 2 laps. Finbarr once again punctured but managed to regain contact with the main bunch and finished out the tough stage there. Battered by wind and hail-stones; “Man am I glad that’s over” he exclaimed at the finish.     In the A4 race team tactics would be the order of the day and were played out brilliantly by the lads from Orwell Wheelers who had a man 5 seconds off the lead in second place overall. Reminiscent of the tactics that saw our very own Noel O’Dwyer take victory in this event in 2014, they had a man go up the road from about the 6km mark and he stayed away. The leader on GC from Lucan, who was their sole rider, had the onus on him to do the chasing. And chase he did for 60km. Colm spotted the Orwell Wheelers men then go to make their move on the final approach to Kanturk and sat in on the wheel of the man in second place. At the gallop up the hill as the numbers dwindled and Colm secured 5th place on the stage, however the stage winner did overtake him on GC so finished the weekend in 7th place overall.

The under 16 lads Colm had been coaching and helping out over the last year or 2 had set him a target of being in the same races when those lads turn junior in 2017, Mission accomplished.