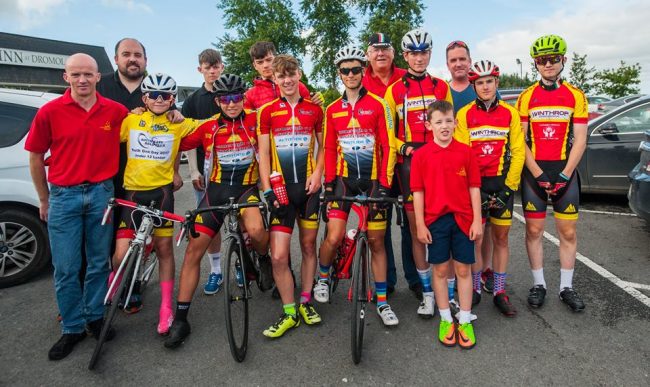 Tuesday morning, July 11th we set out. Destination, Co. Clare for the 2017 edition of the Scott Bikes, Junior Tour of Ireland. Comeragh CC had one of, if not the biggest representations in this years race with eight of our own riders and two guest riders, Fergal Murphy from Killarney CC and Jair Kelly who travelled all the way from the tiny Caribbean island of Aruba to compete in the tour.

The 6.3km time trial took place on Tuesday evening with the first rider off at 7pm and all others at one minute intervals. Team Ireland’s Ben Walsh was first off and set a blistering time of 7mins 47 secs, a time which put him in the race leaders yellow jersey, which he ultimately held for the entire tour. Jason Kenny was the fastest of the Comeragh riders with a time of 8:36.

Wednesday, the first road stage including the famous Cat 1 climb near Doolin, Castle hill. The stage would end on the by-pass in Ennis in a bunch sprint of 52 riders. A fantastic result for two of our riders, Tomás Walsh and Ciaran O’Sullivan both in the winner’s bunch with Tomás taking a superb 16th place on a blistering hot day.

Unfortunately for most of Team Comeragh Stage 3 of this years junior tour is a day they’d sooner forget. 12km into the stage on a damp and dreary day, a crash occurred at a pinch-point on the road. From the view of the team car back in the cavalcade, all that could initially be seen was a split in the bunch when 30 or so riders continued on while the remainder of the bunch was either down, or held up by the crash. Then came the call over the radio that we didn’t want to here; “Team Comeragh to the crash point”. Jason, Rhys, Conor, Fergal, Evan and Ciaran all came down. Ciaran got up fairly quickly and was able to chase back on in a short space of time. Conor, bruised and cut with a shredded jersey, Fergal with a sore wrist were next to get back on their bikes. Jason’s forks snapped on the crash so he required a replacement bike, Rhys’ handlebars snapped so spare bike for him too. Evan unfortunately had a suspected fracture to his arm and was forced to retire from the race at that point, thankfully however it turned out not to be broken.

The stage continued on toward the Clare coast line. Powerful winds blowing in from the Atlantic and a dense fog at the top of the Cliffs of Moher climb would greet the riders. Unavoidable spits would occur in the race and Aaron found himself in a groupetto of 15 or so riders, separated from the leading bunch. A lapse in concentration from a few riders in that bunch caused another crash in which all of them came down. Aaron was extremely unlucky not to avoid the spill right in front of the team car. Former junior tour participants, club members Brian Ennett and Luke O’Donovan were on hand straight away to help getting all the fallen riders back going again. Aaron coasted home, sore and annoyed, and just as he crossed the line, his derailleur hanger snapped. Lucky out!

At the end of the stage it transpired that Rhys had also been forced to step off his bike and get in the car due to a suspected concussion. He’d spent that night in hospital as a precaution but was released early the following morning and was on hand for the remainder of the race to help out when needed.

Tomas and Ciaran were once again nestled in the reduced bunch at the sprint for the line. Tomas taking a superb 11th place to lift the spirits of the team on a tough day. Ronan and Jair weren’t too far back either.

Hoping the bad luck was behind us we set of for Ballyvaughan for the stage start on Friday. The stage would include the climb of Corkscrew Hill. Early in the stage Jason lost contact with the bunch, clearly suffering from the knock he took in the crash of the previous day and retired for the race. The climbs and KOH primes split the race to pieces. Ciaran was the first of the our boys home, loosing just over a minute on GC.

Stage 5 was held on second to last day of the junior tour with a hill-top finish at Gallows Hill. Conor could be seen early on to be suffering, he’d taken quite a bang in the crash on stage 3 and unfortunately could go no further. Again the early classified climbs would cause splits in the field and once again bad luck played it’s part as Ciaran was involved in a crash at a crucial point in the stage. The cuts and bruises he obtained however spurred him on for ride of the day. He’d battled long and hard and once again, closing the gap to the stage winner to a mere 30 seconds by stage end. Jair, who comes from an island with virtually no climbs to speak of really came into his own on the stage, only losing contact on the steepest of gradients on that arduous climb to the line.

Final stage of this years Scott Junior Tour took place with 7 laps of the circuit to be completed. One for the sprinters we’d expected maybe, but there was also a stinger of a little climb to be overcome on each lap. The pace was fast and the race was lined out early. Riders being detached early on Aaron and Ronan managed to get in a group of detached riders and did a sterling job to finish out the race. So fast was the pace that even Tomás lost contact for a shout time at one stage buy battled back on. The bunch finish at the end contained Ciaran, Jair and Tomas. With Fergal not too far behind at all.

At the end of the 492 kilometers of racing, Ciaran O’Sullivan was placed in an absolutely brilliant 25th place overall, a mere 2 mins 39 seconds down. Not only that but he was in 12th spot in the first-year juniors competition. Chapeau.

Tomás, Jair, Ronan, Aaron and Fergal. A pat on the back for ye all for finishing the race out. Jason, Rhys, Conor, Evan. While unfortunately ye couldn’t finish this year due to injury, you’ll bounce back stronger than ever. Nature of the game.

Comeragh Cycling Club, and committee would like to extend a huge word of thanks to all who made possible, the entering of 2 teams in this years Junior Tour. It was a huge achievement for all, not just the riders. To the members of the Power family, Sinead, Cian, our mechanic, who had a few busy evenings, Ciarán, whose exeprience spurred the lads on all week, their dad Pat who did some amazing work organising road-side bottle passes. John Hammond who kept the riders legs in top condition and even managed to rope Ciarán into helping out post stages. John Coleman for working alongside Cian in all things mechanical. Karen Coleman, Bernie Walsh who helped with the food, drinks and washing, Hayden Power and Niall Cullen our 2 apprentices who helped with the washing of the bikes and the transfer from the washing location to the lock-up. Well done all.

Looking forward to when we can do it all again for the Scott Junior Tour…… 2018!!