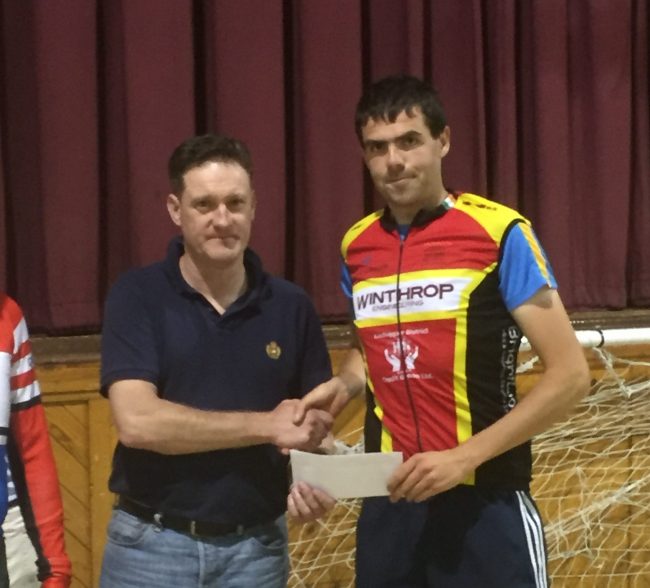 The Clonmel Stage race was held on Sunday May 28th. A pretty unique format with the 3 stages being run over the one day, no points or prizes on offer for the individual stages but solely for the overall general classification at the end of the day . There was seperate A3 and A4 races and with no pesky junior riders present, made for an interesting days racing.

We had 7 riders down for the start today in the A3 race. The plan was to make sure we had a rider in any of the moves that tried to go and if it was to come down to a bunch sprint we would set Martin O’Brien up for the gallop but early on, 2 riders slipped away and got a gap of around 30 seconds and neither were a Comeragh rider. The bunch slowly started to get organised and riders started pulling on the front to try bring the them back with our own Paudie Walsh, Eoin & Pat Maher and Colm Dillon working hard to chase them down. However, the two riders were coping well out front and maintained the gap of around 30 seconds. Coming into the finish it was lined out on the front with David and Martin sitting 4th and 5th wheel. David then hit the front with 500m to go to try set Martin up for the finish. At this stage 3rd place was only on offer as the 2 out front hung on by 10 seconds Martin pushed hard to the line and finished the stage in 4th place.

Stage 2, mountain road finish
With only a short break between stages we were back on the road pretty quick and with it being such a short stage of only 24km it was going to be fast. It was all together as we travelled the back road to Kilsheelan and back  in the main road to Clonmel before we took on mountain road. The group stayed together pretty well on the early stages of the climb until Paudie set the pace on the front and started sending riders out the back as the climb went on. With 1.5km to go Tom Shanahan from Limerick CC attacked hard out of the bunch with David Howell locked onto his wheel but the pace he set got the better of David and got swallowed up by the bunch with 500m to go. At this stage there was only about 25 riders left as the sprint for the line opened up with Martin taking 4th and David 7th with Paudie and Colm also in that group.

With it all still to play for with the TT to come Martin, Paudie, David and Colm were all tied on the same time. The lads gave it all and emptied the tanks up the famous Ticinkor climb with David moving up to 6th overall an earning himself an A2 licence and Paudie up to 10th overall.  Also a mention to Eoin and Pat Maher and Finbarr Power who also rode very well.

Brian Kenny was Comeragh CC’s sole entry in the A4 race which ran the very same format and distances as the A3 race. Brian was very unlucky to suffer a mechanical on stage 1 which meant he lost time and would spend the remainder of the day trying his best to claw back the deficit. Well done Brian solid effort.

A special word of thanks goes to David Butler for his exceptional managerial skills throughout the day.