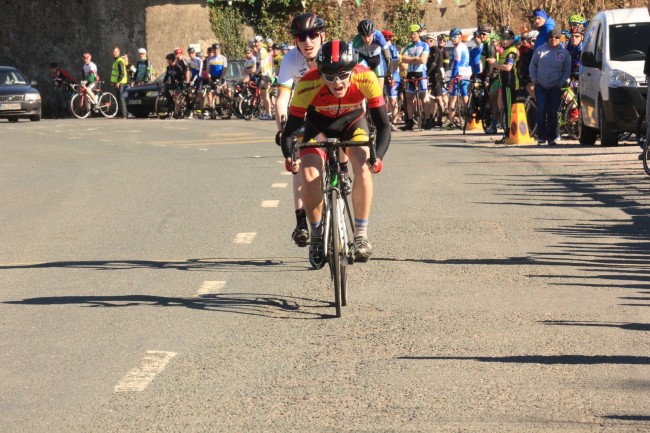 Sunday May 26th say the annual hosting by Dungarvan CC of their Cyclesports Cup. While the route kept the same loop, incorporating the Colligan climb, the start/finish point was mooved to near Modeligo. A full card of races was held including at underage level and Comeragh CC had representation in all races.

First up was the under 12 race with Hayden Power being our sole representative.

Hayden crossed the line in 2nd place for the second win in a row, after also placing second in the previous weeks race at the Des Hanlon in Carlow.

In the under 16 race Comeragh CC had a very strong representation with 5 of the 11 starters. The under 16’s would do a full lap of the 36km circuit and at the finish it was Steven Crowley in a brilliant second spot who was our top placed rider.

Miceál Hayes, Luke Griffin and Brandon Walsh would then cross the line in 5th, 6th & 7th places respectively after sprinting it out between them.

After the A3/Junior race I looked for a volunteer to write a race report so Jason Kenny agreed. Here’s Jason’s report;

The club was represented by 11 riders in the A3/Junior race. The race was three laps of a 36 kilometer circuit taking in the Coligan climb every lap.The attacks started from the gun with Conor Coleman and Ciaran O’Sullivan getting into an early break. Ronan Twomey of Cork Giant would eventually ride all the other riders off his wheel with Ciaran being the last to be caught by the bunch. It would remain much the same for the second lap with Twomey hanging off the front of the race and the team working on the front to pull him back. On the last lap up the colligan the decisive split was made. A group of five including Rhys Kenny rode away and made short work of bridging the gap to the front. With the Comeragh riders still in the bunch marking attempts to bridge across the gap went up to over a minute and with only a few kilometers remaining it was clear that the break had the first six placings sewn up. When the sprint came Rhys came across the line 5th with Brian Ennett winning the bunch kick for 7th and Ciaran getting 1st unplaced junior. There was great teamwork by the bunch to get four across in the first ten riders in the sprint. It was a great day for the team and well done to all riders.

Well done Jason on the write-up. Will be looking for another volunteer next week.

On another very important side-note, Comeragh CC assosiate member Donal O’ Cionnfhaolaidh who rides with UCD (While he studies there!) had a great weekend in Rás Mhaigh Eo, finishing a brilliant 3rd place in Saturday’s first stage. Donal would go on to finish 6th overall and earn himself an A1 licence. Bravo Donal!!