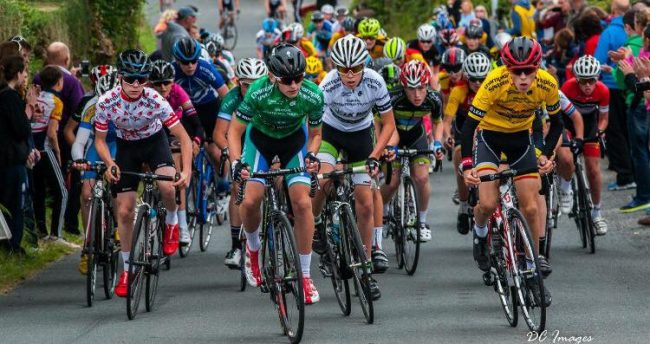 It is a long way to come for a cycle race but having seen the work that goes into organizing the event and the professional way it is run, the 5 hour journey was worth it.

Comeraghcc have 6 riders in the 2017 event, Hayden Power under 12 and Stephen Crowley, Ciaran Frisby, Luke Griffin, Brandon Walsh, Miceal Hayes U16, Miceal representing Munster this weekend.
First off the u12, with 48 riders participating this was the biggest race that Hayden has participated in, driving the course he thought it wasn’t too hard but he rode a practice lap and realized how different it felt. He started off well, however once the flag dropped after the neutralized zone the hammer went down. A three man breakaway went away including the Munster Champion from Killarrney, Hayden positioned well in the bunch felt unwell on the first climb and as he passed his supporters on the 2nd climb he was sick and lost some valuable time(I blame his mothers scrambled eggs!). He finished well in 18th place, happy that he finished but a little disappointed. He will start the time trial at 8.48 Sunday morning and I’m sure he will make up some ground on his nearest rivals.
Due to a wedding taking place in the village, the U16 group had a long wait until there race which didn’t start until 3.45pmover an hour later than anticipated. As expected due to a large field this broke up but more as a result of a crash which saw two of our riders come down Miceal Hayes and Stephen Crowley, thankfully only a few scratches, nothing serious. The race had to be neutralised for half a lap after the crash as a number of riders had to be seen by the ambulance. Once the race restarted all 5 Comeragh riders doing well to keep in with the Irish national team and the isle of man teams who were very strong, Luke unlucky to cramp on lap four and Ciaran having shoe trouble early on in the race, but overall the boys held their own in what was a very strong field. The first of the Comeragh riders off in the Time Trial(Stage 2 of 4) is at 10.47.
Stage 3 Sunday afternoon is another very hard circuit of 9.5km, the last 2km being a climb to the finish. Hayden has 1 lap, the U16’s 5 laps. I will keep you updated from Donegal after the stage, fingers crossed all goes well.