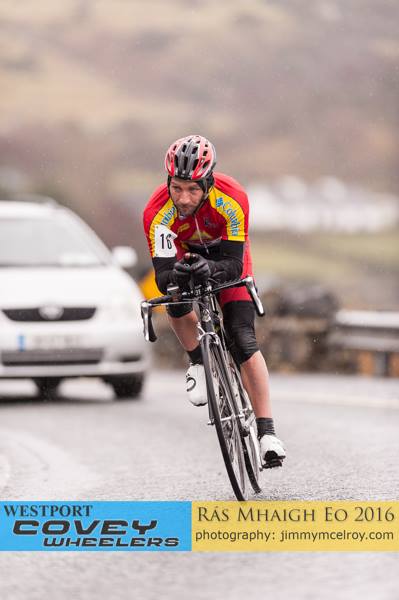 This weekend saw the Maigh Eo Two day, a gruelling three stage race held over two days based in Westport. Tadhg de Barra from Comeragh CC/ Tramore.ie was the clubs sole representative in this race. Day 1 was a 100km race from Westport to Leenaun up the ‘Connemara Loop’ back to Letterfrack past Kylemore Abbey back home to Westport. Conditions were difficult with strong winds and cold temperatures although the weather was dry. A break of five riders escaped early in the stage and despite numerous counter attacks during the day, weren’t caught. High winds caused the bunch to split on several occasions with Tadhg working hard to remain at the front each time. Tadhg escaped several times but couldnt bridge to the break. The second day began with a short four kilometer time trial from the foot of Croagh Patrick back toward Westport. The afternoon stage was a 95km epic which took place in wind, rain and 4 degrees temperature, a hard day in the office for all. A small break went early on the road to Louisberg and numerous attacks held the gap. Tadhg attacked multiple times to try get across with others but a bit like bad speed dating; it was either with the wrong guy at the right time or with the right guy at the wrong time. Coming past Delphi and descending down into Kilary harbour, a group did get across to the break. These six were chased fiercely by the bunch which in turn split to pieces on the short sharp climb back into Westport. The break had a mere nine seconds advantage when the chasers including Tadhg galloped into Westport. Back to back stages in very tough conditions and an attacking participation was excellent training for the Ras aspirant.