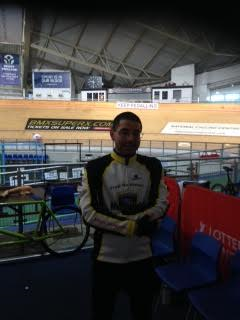 Manchester Paracycling International 13 – 15 November 2015
We had an early start Thursday morning as Martin Mizgayski and I
travelled to Dublin airport to catch a flight to Manchester.  It was
very windy in Manchester and I was glad that we were going to be
cycling indoors as Storm Abigail was following us over.  After
checking into our hotel and some lunch we took the short journey to
the home of British Cycling to get our first glimpse of the Vellodrome
and to take part in a public session to give us a taste of the track.
We rolled around the blue line to get a flavour for the bends.  We
gave our coaches a couple of mild heart     attacks when we wobbled
and slid around the top banks.  They reminded us to keep pushing on
the bends and to keep our speed up going through each corner.

After breakfast on Friday morning we were back at the track to get
some experience of going around the black line at race pace.  WE
warmed up on the blue line and had another little wobble and our coach
Enda joked that he was going to introduce us to the medical staff.
Martin Kirwan (Focus on Fitness) came over Friday morning to support
us and to assist the Development Squad.  After a few laps around the
black line we went back to the hotel for lunch and to get some rest
before our race later in the evening.

WE were back at the track in plenty of time to get warmed up four our
first race on the vellodrome.  Our first event was the Kilo race.  WE
were the first team off and were in good spirits as we walked over to
the gate.  As we were coming to the gate I heard the lads from the
Development Squad cheering us from the stands and I gave them the
thumbs up.  WE were on the bike and just as the gate left the bike go
for us to start, disaster struck as we didn’t get going and I hit the
ground.  WE didn’t know that we could get a restart, so we jumped up
and tried to get back on the bike as quickly as possible as we thought
that the clock was still running.  Our coaches ran out to stop us and
to calm us down and we got back up and started again. We got out of
the gate this time with no trouble and completed the 4 laps in a time
of 1:12, placing us in 11th position.

WE got down to the track early Saturday morning so that we could
practice starting from the gate. We got out of the gate perfectly and
as we had loads of time to warm up we watched our team mates compete.
It was difficult watching them without shouting as I wanted to
preserve my energy for our 4km pursuit race.

After a good warm up, it was time for us to walk over to the gate to
start our race.  When we were being called up I noticed that the
Scottish team were not called up so we didn’t race the pursuit against
anyone.  I was disappointed with this as I would have loved the
experience of racing another tandem around the track.  We got out of
the start gate perfectly, which was a big relief.  It was very
difficult to hear our coaches   shouting our split times.  I lost
count of the laps and didn’t know how many we had done until I heard
the bell for the final lap.  WE completed the 4km in a time of 4:43.
This was the hardest 4km I have ever done and I couldn’t believe how
bad the back of my lungs were burning after the finish.  I got up on
the turbo to cool down and I was still coughing and spluttering 20
minutes after we had finished.

After dinner we went back down to the track and to support our team
mates in their ride off finals.   Colin got a Gold in the C2 category.
Gerry narrowly missed out on Bronze by 0.332sec   in the C4 category.
Katie and Eve got a Bronze and a PB in the Female Tandem category.

A  Huge Thank You has to go out to Cathal Miller, Enda Smith and all
the lads at Sundrive Track in Dublin who did fantastic work with us in
preparation for this event.  Thanks also to Martin Kirwan who had me
in great condition for the event and, Thanks to Martin Mizgajski for
his superb work on the front of the tandem.  It was an amazing weekend
of racing and I’m already looking forward to our next event!!!