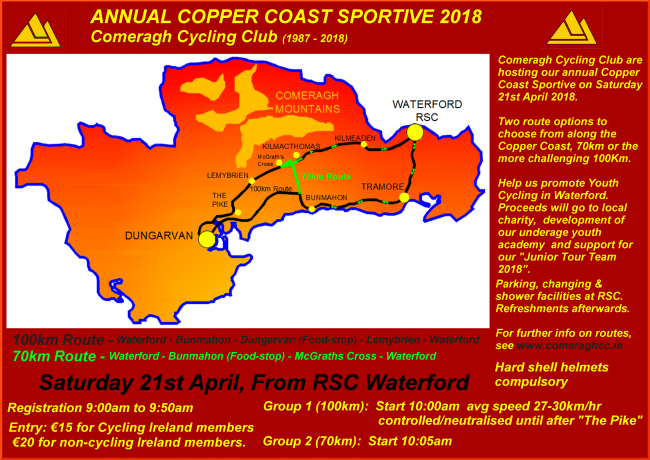 The annual Comeragh CC hosted Copper Coast Sportive will this year be held on Saturday April 21st from the Regional Sports Centre Waterford. As with the last number of years the 100km, longer option is unchanged, however there is a slight change to the shorter route; now 70km. Entry fee will be €15 for Cycling Ireland licence holders and €20 for those who currently aren’t Cycling Ireland members. Registration is from 9.00am to 9.50 am. Group 1, the 100km cycle will roll out at 10.00am while Group 2, the 65km cycle will depart at 10.05am.

Both routes travel from the Regional Sports Centre in Waterford, to the traffic lights at Ballybeg, turning left then and onto the six-cross-roads roundabout, again then turning left towards the Balindud Roundabout and then out the main Tramore road. From there all will cycle out through the village of Fenor and onto Annestown and the Copper Coast road to Bunmahon. After Bunmahon those who have chosen the 70km option will cycle inland towards Kilmactomas and then back the main Cork-Waterford via McGrath’s cross (change here to previous years in order to avoid crossing over the N25) to the RSC, while the 100km route will take cyclists onto Dungarvan before returning back the same N25 Cork-Waterford road. There will be a food stop for the 70km cyclists in Bunmahon while the 100km food-stop will be in the carpark of Garveys supermarket in Dungarvan. For the 100km cyclists, as last year, the pace will be controlled to the top of the Pike hill after Dungarvan. Parking, changing and shower facilities will be available at the RSC with refreshments also afterwards.

In 2017 Comeragh CC entered two full teams of five in the Junior Tour of Ireland, a feat unmatched by any other club in the country. There our young 17 and 18 year olds made very impressive accounts of themselves, their families and their club, against some of the finest up and coming competitive cyclists around. The event also attracted teams from North America, The UK and South Africa. With some of our juniors moving onto the under 23 ranks, we will be entering one, five-man team, in this years event.

Our young junior cyclists are graduates of our highly successful ‘Youth Academy’ which continues to help promote the sport of cycling among younger cyclists in the region, so perhaps we will have more Junior Tour Teams in years to come.

Help us promote Youth Cycling in Waterford. Proceeds will go towards development of our underage, Youth Academy and support of our 2018 Junior Tour Team.

Keep an eye out here, and on our Facebook page for further updates and news. We Sincerely hope to see you there on the 21st of April for a great day out.