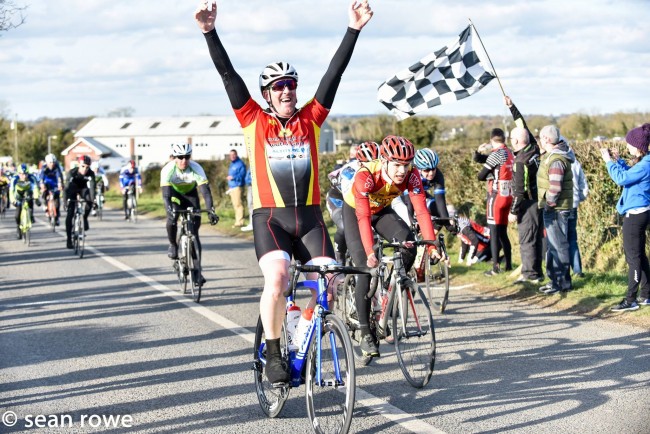 The 2016 Cycling season is going to be a busy one for Comeraghcc with our Sportive in April, the An Post Ras in May and

hopefully the Paralympics in Sept for our visually impaired member Damien Vereker. However last weekend belonged

to ex-professional and two time Olympian Ciaran Power. Having retired from professional cycling in 2008 he returned

to the sport in 2014 to ride the An Post Ras for charity, unfortunately due to a family bereavement those plans were

put on hold. Ciaran turns 40 this year (I know he won’t mind saying that),he has rode the Ras on Numerous occasions

and won it twice but never in his club colours. This year Comeraghcc will be entering a Team so preparation is Key.

Comeraghcc were represented in Navan last Sunday by 3 of our riders, Ciaran Power, Martin Cullinane and Robert

Coffey. In the A3 race Robert who has returned to the sport after an absence of 21 years was happy ride to get the

feel of what racing is like again, in a field of over 80 riders he held his own finishing safely in the bunch and looking

forward to next week. Sunday belonged to our A2 riders Martin Cullinane and Ciaran Power, they rode a very tactical

race. Ciaran who is not yet at full fitness for climbing sat comfortably in the main bunch for the first lap, while teammate

Martin went up the road in a small group on lap 2, they were caught by the main field going out on the last lap when Ciaran

went away in a group of 6 riders, they stayed away until approx. 5k to go when they were caught by the main field. At

that point both riders knew it would come down to a bunch sprint, unfortunately for Martin he was caught up in a crash

within the last 2km which ended our chances of a one two! Ciaran who felt good knew if he read the sprint right he would

be in with a chance and luckily he did get it right, sprinting to victory and taking the clubs first win of many this season.

A picture paints a thousand words.

We had one representative in Tralee for the Lacey cup, Tadgh De Bharra who has returned to the sport after 11 years of

an absence. The race which was handicapped had a nice climb on it which Tadgh says he didn’t have good legs for the first

the race back together. All in all a good weekend racing by all club members.

youth panel, we would like to congratulate the following members. U14 Stephen Crowley and Luke Griffin, U16 Conor

Coleman, Jason Kenny, Ciaran O’Sullivan and Thomas Walsh. Watch this space it is going to be an exiting one for our