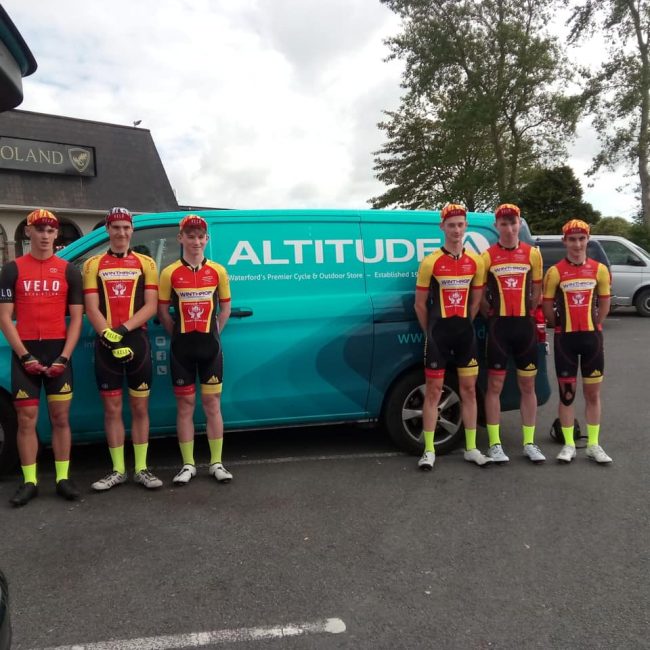 For the third year in a row, representatives from Comeragh CC made the journey to picturesque County Clare for the Eurocycles-Eurobaby sponsored Junior Tour of Ireland. Competed over 6 days from Tuesday July 9th to Sunday the 14th. Our team of 6 riders, Luke Griffin, Ciarán Frisby, Miceál Hayes, Steven Crowley, James O’Shea & Niall Hogan , supported by Team Manager & mechanic for the week, yours truly, Colm Dillon, Soigneur Cian Power, Logistics co-ordinater Sinead Power, as well as the lads parents and other family members who chipped in throughout the week.

Stage 1 this year was a 48km road stage just outside Ennis heading on a loop in the direction of Gort.

The relatively flat stage was completed in just over an hour in a blistering pace of over 47kph. The stage was won by Eli Husted of the USA based Hot Tubes team winning from the two man breakaway from fellow American Seth Callahan of the Lux Sideshow squad. The duo just held off the the chasing bunch at the finale maintaining a slender 7 second advantage at the line. All 6 Comeragh riders finished safely in the bunch.

Here’s a link to Hannah Hayes’ video of the finish;

Wednesday was the 95km West Clare stage, starting at the race HQ West County Hotel in Ennis and running along the edge of the Shannon Estuary, finishing in Kilkee. A wet day lay before the 140 riders. Thankfully all survived the day intact, even though they were soaked by the end. The day featured the first of the junior tours categorized climbs, 3 Cat-3 and 1 Cat-2 climb giving a tasty 650 meters of climbing on the day.

Won by Ian Spenkelink of the Hoppenbrouwers viro-de Zwaluwen team based in Belgium with Magnus Shefield of Hot tubes in second. Comeragh riders fought hard all day in the trying conditions, Miceál Hayes the best of our finishers, limiting his time losses to little over 6 minutes.

Thursday’s stage 3 was a route not covered in the previous two editions of the race, covering 90km, the East Clare stage took on two Cat-3 and two Cat-2 climbs with a similar amount of elevation gain as the previous day but with much better weather conditions. Stage honours would go to Nick Carter of Hot Tubes, Green Jersey’s Issac Peatfield coming home in second place.

Another tough day on the bikes, all Comeragh riders home safe n sound. Very testing roads, few spots of loose-clippings, just to make things interesting!, fast 1st hour followed by the climbs which came one after the other with little reprieve…descend off one, then straight onto the next. Ciarán rode a cracking ride, was our best finisher on the day and was extremely unlucky not to be in the main bunch, puncturing in the closing kilometers. Rest of the lads finished very well in their respective groups not too far back.

Starting and finishing in Ballyvaughan, Friday’s stage was when the serious climbs were to be overcome. 110km in length and included in that were the Cat-1 climbs of Carron, Corkscrew and the arduous Castle hill out of Doolin. Joe Wilson of the Green Jersey team won the stage and Team Ireland’s who came home in 11th place but same time as the winner would take over the race leaders yellow jersey.

A grupetto day for all our lads, they settled into their own group of 30 or so riders by the time the second cat-1 at Corkscrew hill was completed. They still managed a very impressive average of over 36kph given that they’d complete almost 1,100m of climbing.

The slightly altered penultimate stage of the 2019 Eurocycles-Eurobaby Junior Tour would be the longest of the week at 127km and would be another one for the climbers with another crop of categorized climbs including Sally bank, Windy gap, and Gallows hill, a total elevation gain of 1,200m for the day. An early mechanical for Ciarán necessitated a bike change but we managed to to a quick road-side repair on his own bike so he switched back, the second change was lightning quick, pity  we didn’t catch it on video!!

Miceál came into his own on this day, showing what he’s capable of, finishing a mere 7 minutes off the stage winner, Hot tubes Magnus Sheffield.

The final stage was the same as previous years, the Ennis Circuit Race. The story of the day was the freshly laid loose chippings on a few different sections of the loop, the second of which gave rise to a serious amount of dust being thrown into the air. Not nice when racing surely, given that the breathing would be fairly deep.

All Comeragh riders finished out their junior tour in good spirits having put in an amazing week. They fought hard, each had their ups and downs and learned so much from the experience. Their behavior all week was impeccable, they represented themselves, their families and their club to the highest standard.   Well done lads.

The overall winner of the 2019  Junior Tour was French Canadian Nicolas Rivard of Hot Tubes. The 547km of racing was covered at an average pace of 43.06kph. Amazing stuff for under 18 yr olds.

A huge thanks again to all the race organisers, officials, marshals, medics, managers and mechanics. To all the support crew, parents, family members, also. To the sponsors of Comeragh CC with a special thanks to Altitude Waterford for the loan of the van for the week.

To Niall Hogan’s dad Richie of STS Group Waterford, we also extend a huge thanks. 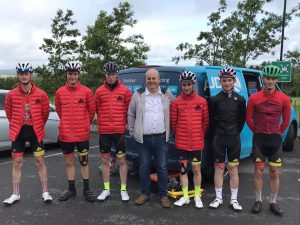 …. And finally to anyone who sent us well wishes over the week, a huge thanks.