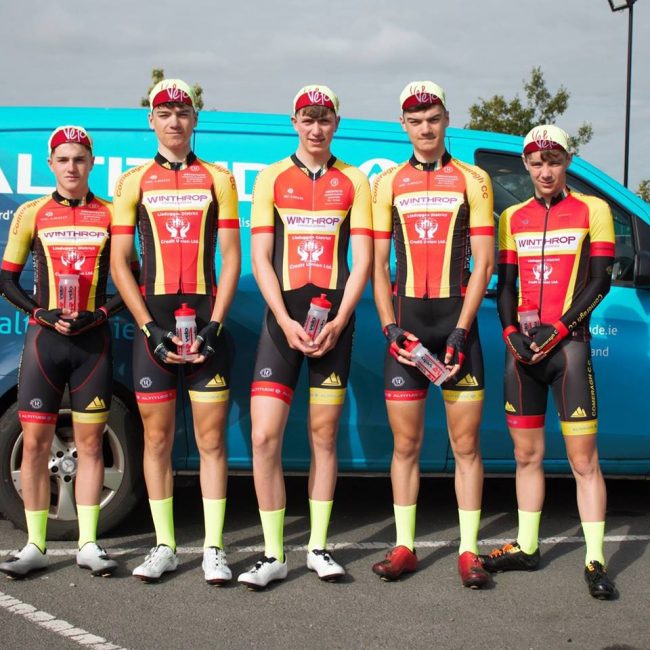 For the second year in a row, representatives from Comeragh CC made the journey to picturesque County Clare for the Eurocycles-Eurobaby sponsored Junior Tour of Ireland. Competed over 6 days with an individual time-trial kicking things off on the Tuesday evening followed by 5 road stages, the last of which was a circuit race just outside Ennis. Our team of 5 riders, Jason & Rhys Kenny, Tomás Walsh, Aaron Dillon and Ciaran O’Sullivan, supported by Team Manager, yours truly, Colm Dillon, Mechanic Cian Power, Soigneur John Hammer, Logistics co-ordinater Sinead Power, as well as the various parents and other family members who chipped in throughout the week.

Stage one; Individual time-trial covering a distance of 6.4km, won by Magnus Sheffield of the US Hot-tubes team in a time of 7mins 54seconds giving him an average speed of over 48.5 kph. Jason, as expected, was the quickest of the Comeragh boys with a time of 8’46”, next was Rhys at 8’54”, Aaron at 9mins exactly, Tomás at 9’11” and then Ciaran at 10’30” after his chain jammed up as he exited the starting house, costing him well over a minute.

Stage Two; Wednesday’s stage covered a distance of 95km featuring 3 categorised climbs, two cat 3 and one cat 2. The stage finish was at on the sea front in Kilkee. Comeragh’s team car was no.20 in the cavalcade following the tt results. The first break of this years junior tour went off inside the first 20km and amongst the numbers called out over the race radio was no.80, Jason Kenny. Up the road for a bit, but no sooner were they reeled back in when Jason’s number was called again, this time unfortunately for a puncture. Neutral serviced was tied up with other punctures from the rough surface so Jason was unlucky to have to wait for team-car no 15 to service him. Then almost immediately, ‘service no.78′ Aaron! Double puncture!! drafting through the cars in the cavalcade, both managed to rejoin the main bunch, but just as Aaron got back on, the pace was upped as the race began the 1st climb of the race and 1st opportunity for mountains points. Aaron began to loose contact and made the decision, rather than burying himself for 2 hours, to sit up and save himself for the days to come. Averaging 42.2kph for the stage, the pace was hot, as was the day. Our road-side crew was on hand on climb near Moneypoint power-station to hand out bottles to the lads. With 20k remaining, once again a Comeragh rider’s number came over the radio, ’77 front puncture’ Ciaran this time. With the pace climbing as the finish loomed Ciaran’s chances of regaining contact were slim so he also rode home at a more sedate pace. Winner on the day was Team Ireland’s Shay Donnelly, Tomás & Rhys finished the day in the main bunch, Jason lost 57secs , Ciaran just over 3mins and Aaron came home in a grupetto at 24mins down.

Stage 3; The Cliffs of Moher stage of the 2017 Junior Tour stuck in the memory of the Comeragh CC riders for all the wrong reasons, a stage marred by crashes which ended the race for 4 of our riders. Determined to put those memories well and truly behind them, the lads rolled out from race HQ with an air of confidence. There was the small matter of 1 cat 3 climb then the cat 2 climb of Cliffs of Moher itself to contend with within the 101.7km stage. A quiet day by comparison to the previous day in the team car, there was no mention of any of our riders loosing contact or having mechanicals. All together coming into the bypass in Ennis for what was going to be a bunch sprint. Won by Ditch rider Ian Spenkelink of Team Tempo-Hoppenbrouwers,  Tomás rounded out a great day and bagged himself 6th place, top Irish club rider! Rest of the lads were also in the main bunch. Great day. No time losses either.

Stage 4. The longest of this years stage at 127km including the first cat 1 climb of this years tour at Corkscrew hill before a finish in Ballyvaughan lay before the 113 remaining riders. A brutal pace of 43.5kph whittled the main bunch down to some 60 odd riders Jason & Rhys amongst them. Winner on Friday the 13th, Luke Lamperti of Team Swift. A mark of how they’ve progressed over the last 12 months, the twins were clearly annoyed that they didn’t contend for honours on the day whereas they previously might have been content just to finish. Ciaran earned a different honour on the day, becoming the only Comeragh rider to end up on the deck during this years tour. Back up almost straight away and un-scathed, Ciaran was laughing at his misfortune as we overtook him in the team car. Tomás finished 13mins down and Aaron and 17 mins after he dropped his chain at the wrong moment on the Corkscrew climb. Under 16 Comeragh rider Micheál Hayes was special guest in the team car for the day, getting a taste of what lies before him in 2019.

Stage 5; At 122.5km, the penultimate stage of this years tour was certainly one for the tough men. A cat 3, two cat 2’s of Sallybank and Windy-Gap and the infamous cat 1 climb to the finish line atop Gallows hill lay in store for the riders. A brutal average pace of over 40kph was once again recorded on the day. A very exciting stage with the white, green and even yellow jerseys making appearances back in the cavalcade. The race was certainly on and overall lead would eventually change hands on the day. Stage winner was once again Luke Lamperti of Team Swift. Rickardo Broxham of South Africa taking over the leaders yellow jersey from Magnus Sheffield of Hot Tubes. Jason finished top Comeragh rider on the day at 1min, Rhys crossed the line with rider who’d ultimately loose the yellow jersey, Sheffield of Hot Tubes. Ciaran was at 2mins, Aaron at 6’50” and then Tomás at 15mins after a really tough day.

Stage 6; An unusual site greeted all when we awoke on the morning of the final day in Ennis, After some of the warmest and driest weather on record for a number of weeks, rain was falling, adding some trepidation for the upcoming last stage. A 10k circuit just outside Ennis which would be joined after a few kilometres then rounded 7 times for a stage distance of 77.5km. The rain abated as the racing commenced, another exciting stage was instore as the time gap on GC between first and second was a mere 6 seconds. Pace again high, a few attacks went off the front but were reeled back in. At the finish Isaiah Chass of Team Swift took stage honours giving that team their 3rd stage for the week. Rickardo Broxham of South Africa remained in yellow to claim the overall winners trophy. Jason, Rhys and Aaron were all safely home in the main bunch which rode at a blistering average of 43.5kph. Behind in the various small distanced riders fun was being had, Ciaran and last years guest rider, Fergal Murphy who rode with Greenmount Academy this year, sprinted it out for the line in their group. While Tomás with Leinster’s Sean Nolan a bit further back were jokingly head-butting each other as they crossed the line.

Conclusion; All-in-all a great week was had by all, riders, crew and supporters. Top Irish club rider on GC, Rhys in 36th place at 2mins. Top Irish Club team, and Top Irish club rider stage result. The average for the whole junior tour which covered 531 kilometres was just a whisker under 42kph! The lads represented themselves, their families and their clubs in honourable fashion. They’ve really stepped up from the timid young boys they were just a short number of years ago to fine young men who’ll no doubt get a string of results to their names in the years to come. They’ve set the bar high for the current under 16 Comeragh riders, but no doubt with a solid off season this year, they too will be ready to represent Comeragh CC in the 2019 Junior Tour.

A huge thanks again to all the race organisers, officials, marshals, medics, managers and mechanics. To all the support crew, parents, family members, also. To the sponsors of Comeragh CC with a special thanks to Altitude Waterford for the loan of the van for the week. To Aidan Crowley of Velo-Revolution for sending the lads down a surprise package of socks, caps and bottles for the week. And finally to anyone who sent us well wishes over the week, a hugh thanks.